It is on behalf of immediate residents and neighbors of the St. Boniface property that this letter is written to express our serious concern for the future of the above-mentioned property.

After seventeen years of neglect, we are asking that you, personally, as part of our community, become seriously and actively involved in reaching a solution regarding this issue.  Please understand our concern, as this land has not been properly tended to for the past seventeen years.  In fact, since the demolition of the school building, the Saint Boniface property has become the most unsightly and unkempt in the area.

Since the closing of Saint Boniface church in 1990, both past and present representatives of the Archdiocese of Chicago responsible for the fate of this property have proven their inability to reach a compromising and community friendly solution.  Over the past seventeen years we have seen no willingness on their part to cooperate and or communicate with neighbors.  Only aggressive inquiries on our part have revealed that a zoning variance was to be requested for a possible land deal with Smithfield Development LLC in order to construct some sort of high-rise building.  Please be informed that community support for such zoning variance is overwhelmingly opposed throughout the area.

For the past seventeen years Archdiocesan personnel with the authority to handle this matter, have not accepted the challenge of working with its neighbors to find a compromising and respectful solution.  Due to the Archdiocese’s suspicious unwillingness to communicate with the community, and because of the lack of productive action on the part of the present Archdiocesan personnel involved with this property, we have had to aggressively look for answers and possible resolutions on our own.

In September 2005, neighbors learned of a Coptic Christian congregation interested in restoring Saint Boniface Church as their place of worship. Since then, our community has been in communication with representatives of this Coptic Orthodox Church.  At a meeting set up by Smithfield Development LLC, after being questioned by myself and other community members as to why the Archdiocese is unwilling to talk to the Copts, your representative reluctantly agreed to give them audience, and later allowed them to inspect the church building, inside and out. After touring the church with a team of structural engineers, the Copts expressed, in writing to your representatives, an even more eager willingness to restore St. Boniface.  Even though the Copts stressed that they have all of the necessary resources to take on a project of this scope, your representatives, citing that they are “moving forward” with a developer, quickly dismissed them.  You, yourself, wrote in a recent letter to a local resident, that it is "too late to begin negotiations with them."  Why is it too late?  We fear that you, Cardinal, may have been misinformed on the resources available to this congregation.

This Coptic Orthodox Church, a Christian group, eagerly wishes to work with the community and to restore St. Boniface as a place of worship. They wish to make it a sacred place once again while the Archdiocese of Chicago, who has not communicated with it’s neighbors in years, appears interested in dealing only with a developer wishing to obtain an unwelcome zoning change.

It has become suspiciously apparent to this community, over these past seventeen years, that the closing of Saint Boniface Church and the mission of the Archdiocese of Chicago was, and is, to land bank a tax free and unsightly property with the intent of eventually forcing area residents into agreeing to a zoning change so that the Saint Boniface property can become a lucrative investment regardless of community concerns.  We feel as abandoned as the St. Boniface Church itself.  Please understand that we are not trying to dictate what the Archdiocese of Chicago can do with their property, however current zoning rules do allow a community to have input into what one cannot do with their property.

Our community has proven that the abandoned Saint Boniface church building is not a hopeless structure and we have done much of the homework to prove that this magnificent cornerstone can be saved. We don’t believe that it would take a miracle, but just a willingness on your part to accept a challenge head on, not give up hope, and work with the community who has pretty much handed you a solution.

We pray that you will come to our aid and enlighten your representatives. We pray that you will remind them that a kind neighbor, respect, trust, cooperation, truth and many other God given gifts really are much more important than money and the promise of a large cash flow.

In response to a letter addressed to you expressing concern over Saint Boniface, an area resident received a reply, signed by you stating, “If a group can fix it up, I’d be open to any proposition made”. We believe that we have been more than patient and tolerant. Now, is the time.

What would Jesus do?

On behalf of immediate residents and neighbors of the St. Boniface property, I look forward to your thoughts and assistance in this matter and I sincerely thank you, in advance, for giving this matter the attention it demands.

P.S. In all of its neglect, the Church Building still stands proud as if representing the strength of God, himself.  As an immediate neighbor, I often witness passer-bys making the sign of the cross in respect as they go on their way.  A small thing, yet a powerful sign.  It would be a shame to lose this symbol of Christian holiness and history.

P.S.S. Please refer to the following website which includes a timeline of what our community has been dealing with. At this site you will see how so many parties have struggled over many years for a solution only to receive little or no responsible responses on the part of the Archdiocese of Chicago.  Those who were and are willing to negotiate a solution include The City of Chicago Department of Planning and Development, Alderman Walter Burnett, Jr., Preservation Chicago, Landmarks Illinois, The Eckhart Park Community Council, The East Village Association, The Coptic Church, Friends of Saint Boniface, etc., etc.  Viewing this website may help you better understand our frustration and our spirit to remain as a united and caring community with like neighbors.

Office of the Mayor

Chicago Department of Planning and Development 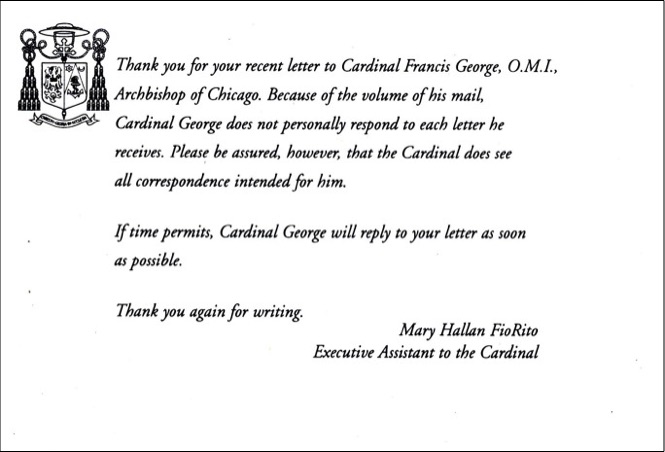